(slightly out of ) FOCUS GROUP 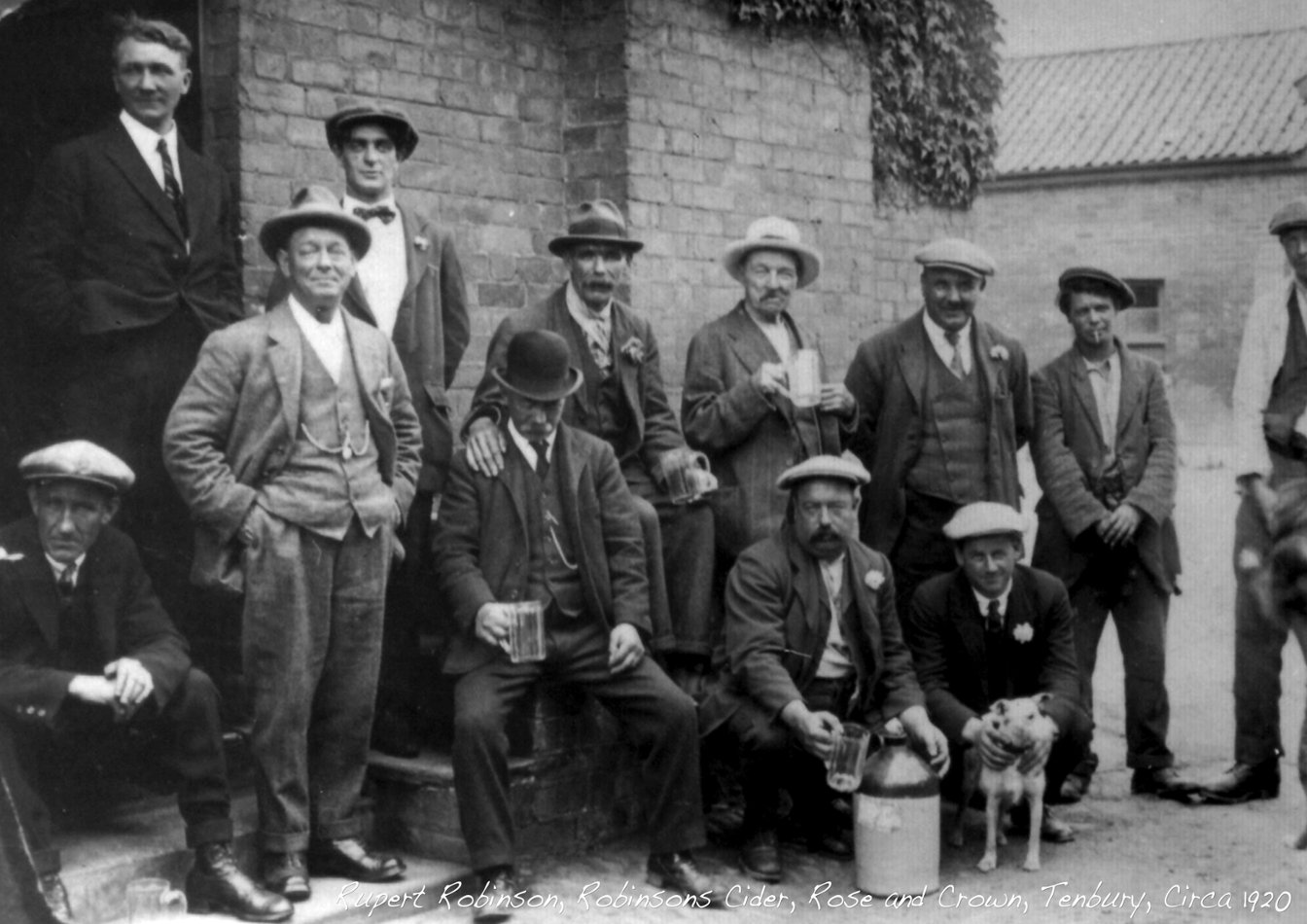 In a review of the Temeside Inn at Little Hereford: “…We were soon studying the menu and enjoying a drink. Enjoyment was definitely the word, for I had a bottle of Tenbury’s very own Robinsons Vintage Cider. Dry and incredibly refreshing, it was certainly a cider for savouring. It was the Cider that helped me choose my meal. The steaks sounded good but with the Cider, well I had to go for the chicken with bacon in a stilton sauce. And that was an excellent choice.” And The Temeside, by the way, is an excellent choice as well!

The 1763 Cider Act proposed by Lord Bute and pushed through by his successor as Prime Minister, George Grenville, was as unpopular in Britain as the Stamp Act in the American colonies. By it, 4 shillings was levied per hogshead of perry or cider. In July 1766 it was repealed to great rejoicing throughout the land but nowhere more so than in the orchard areas of Herefordshire and Worcestershire and in particular in Tenbury. The Hereford Journal reported that “In Tenbury the bells were immediately set ringing and were rung for 4 days. Barrels of cider were drawn out at the Market Cross and given to the poor. Boughs of apple trees hung with gilt apples were exhibited at the bonfires.” And quite right, too.

In an item entitled “I Remember” a local recalls helping with the Cider making in the 1930’s: “The Rose and Crown (at Burford, Tenbury) featured very much in our lives. It was here that I learned to help with the Cider making even if it meant being stung by intoxicated wasps. The horse-powered press had been replaced by a power one (which Robinsons still use to make their Cider today) but the system was still the same, my job being to fill the sacks with the mashed apples and fold them ready for the press. Mr Robinson promised me and my mother that he would send me a case of champagne perry for my 21st birthday, some 14 years ahead. I forgot about this but not Mr Robinson! He was as good as his word and I received a case, as promised, delivered to the guardroom when I was doing my national service in the RAF.”

In an article on the ideal St George’s Day dishes prepared by Gary Rhodes and others Robinsons Cider is recommended as “A true taste of Ye Olde England: an authentic country cider that has real finesse. They don’t make huge quantities but what they do make is one of the best ciders you will find anywhere.”

The menu included stilton and broccoli soup, toad in the hole with onion gravy and bread and butter pudding. Proper food.

Childhood reminiscences from the autobiography of Mike Sargent

In his book “My old man the Gasman” published by Excellent Press in 1998 Sarge recalls an episode in the 1950s when his father and despairing uncle had sent a colleague on a mission…”Your father gave Kelly ten shillings to fetch four quarts of cider from the Rose & Crown. He gave him ten shillings, a note, and him with a throat as dry as a bone he gave him ten shillings over half an hour ago and it does not take half an hour to go to the Rose & Crown and back. Mike, take your bike and go and see if you can find the little b*****d. He’s got the gas works carrier bike’…. I pedalled on until I saw the Rose & Crown and the gas works carrier bike leaning against the front porch and I knew I’d found Kelly.

Now Robinsons Cider was renowned for its flavour and Kelly was there savouring that flavour ever so slowly in the back room bar. He was swallowing down that liquid so tenderly, just like my father did when he had already swallowed a pint all at once, so I knew that Kelly had quenched his thirst and was treating the drink like a great lady who was queen of the ball and then someone shouted up from the cellar: ‘Six quarts, you wanted six quarts’.

And there were others in the room who were crowding the bar and shouting down at whoever it was below because there are only a certain number of hours in the day and then a man came up with a wooden crate all wet with cider…. The barman gave Kelly his change…. Kelly laughed and said ‘I had to try it before he filled them and then I had one while I was waiting’ which seemed to Kelly the most logical thing”.

We use cookies on our website to give you the most relevant experience by remembering your preferences and repeat visits. By clicking “Accept All”, you consent to the use of ALL the cookies. However, you may visit "Cookie Settings" to provide a controlled consent.
Cookie SettingsAccept All
Manage consent

This website uses cookies to improve your experience while you navigate through the website. Out of these, the cookies that are categorized as necessary are stored on your browser as they are essential for the working of basic functionalities of the website. We also use third-party cookies that help us analyze and understand how you use this website. These cookies will be stored in your browser only with your consent. You also have the option to opt-out of these cookies. But opting out of some of these cookies may affect your browsing experience.
Necessary Always Enabled
Necessary cookies are absolutely essential for the website to function properly. These cookies ensure basic functionalities and security features of the website, anonymously.
Functional
Functional cookies help to perform certain functionalities like sharing the content of the website on social media platforms, collect feedbacks, and other third-party features.
Performance
Performance cookies are used to understand and analyze the key performance indexes of the website which helps in delivering a better user experience for the visitors.
Analytics
Analytical cookies are used to understand how visitors interact with the website. These cookies help provide information on metrics the number of visitors, bounce rate, traffic source, etc.
Advertisement
Advertisement cookies are used to provide visitors with relevant ads and marketing campaigns. These cookies track visitors across websites and collect information to provide customized ads.
Others
Other uncategorized cookies are those that are being analyzed and have not been classified into a category as yet.
SAVE & ACCEPT